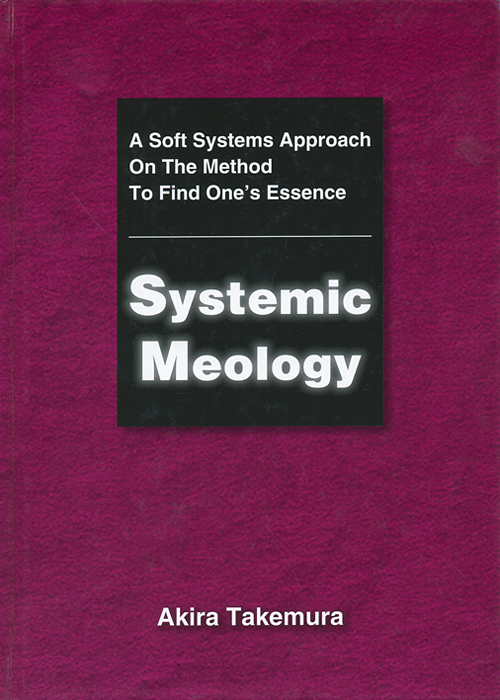 ―A Soft Systems Approach on The Method to Find One's Essence―

In this book, the author tried to arrange hypothetical experiments to find one's essence. He first searched for a hypothesis that brings about the conscious amenity deficiency, set up an “uncertainty of one's essence” as a catch phrase, constructed a conceptual model of personalization (Cognitive Metabolic Syndrome), and thought of and carried out a new feasible and desirable behavioural experiment model of self-study.

Trifled by distorted and incorrect information, we are often buried in a world of our own thoughts and suffer from our own inventions. It is indeed difficult to capture transient signals that we sensed, signs of transference, interpretation based on distortion, replacement and even self-respect, which we are supposed to have all the time. It is becoming more and more difficult to grasp “one's essence” -in other words, one's value system- in this modern society.

An effective way of grasping “one's essence”, which many people have depended on for years, was to adjust their mental models arbitrarily and to ignore their own emotions occasionally. For example, in the world of religions and socialism, it is considered to be a discipline to include such an artificial structure as doctrines and ideologies into a spiritual world and everyone involved is encouraged to copy a “given standard model (how they should be)”. Traditionally, other characteristics were considered meaningless and their influence was denied. In the same way, human emotions were slighted and alienated in the supreme rationalistic society until recently.

However, our spiritual world naturally lies within ourselves. As indicated in Sartre's famous words, “human dignity lies in forming an image of what one should be on one's own responsibility”, one's essence cannot be taught by someone else. That is because you are the foremost authority in transdisciplinarity of “Meology”. Therefore, unless you ask yourself what your essence is and you accept your answer to that question, your essence has no value at all. The ego needs autonomy.

Having said this, while many young people understand an already systemised study method of specialist areas, it is hard to say that they fully understand the meaning of “self study” or the definition of “the autonomous ego” as they have been taught in the conventional “hasty” educational system.

With this in mind, I groped for a new educational method. Since 2000 I have been teaching hypothetical experiment lessons in the subject of “Self Discovery” to find one's essence. I believe that “real education causes behavioural changes” and encourage changes in my students' autonomous ego. To be more specific, I co-ordinate the hypothetical experimental approach so that my students may find their essence. My approach is based on Soft Systems Methodology by Checkland. This is a student participating study approach to find feasible and desirable improvements to an open system problem of the object by following Checkland's circular diagram. As every participant grasps the problem in their own way, this method is based on a premise that there is more than one awareness of the problem.

I dared to develop hypothetically and eventually spun out feasible and desirable behavioural changes to discover one's essence. This creates a behavioural experiment model, with which we try to probe into the identity (as a personality) in our dynamically changing selves (phenomenal selves). The method that I suggest is to repeat the following process; first without creating off-limits zones to the conscience, recognise unique qualia of oneself, then interpret and cope with them as a problem, and finally reflect upon subjective experiences and enjoy them (discovery of “conscious amenity”).

This behaviour experimental model is not only based on a behaviourist approach or psychoanalytic approach. Nor does it depend on an experimental scientific approach of cranial nerves or Naikan (introspection) Method. This is because a unique and emotional quality of “me” is dynamic and not reproductive and to grasp this, conducting assessments, observations of behaviours or magnetic resonance imaging experiments are not quite enough. Having said this, if Naikan (introspection) Method is used solely, arbitrariness cannot be excluded. Therefore, I suggest my behavioural experiment model as a new phenomenological psychological combination of recognition, emotions and behavioural technology based on systems thinking.

Also in this book examples are taken from familiar events, such as experiences of my students and my own and lyrics of songs (incidents that anyone can experience). As well as these, included in this book are clues and keywords, which may be useful for responding to the readers' intellectual curiosity as well as deepening their awareness into their egos and the egos of others'. However, you will also see images from comic books and diagrams, which stimulate the right-side of the brain. These are inserted partly to satisfy my fun-loving personality.

I would very much like you, the readers, to participate in this lesson as you read this book.